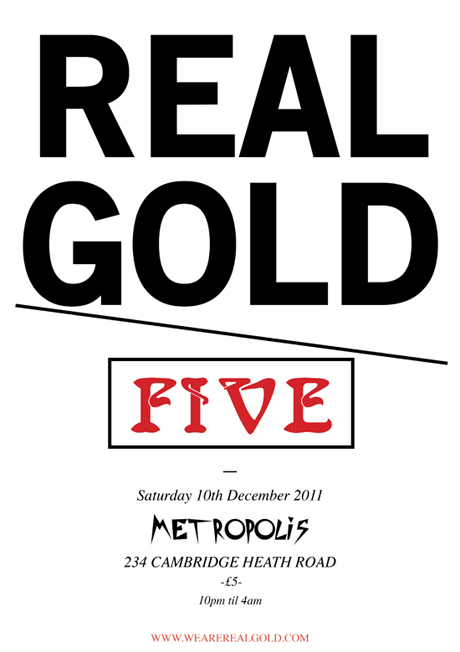 In the winter of 2006, a group of friends came together to found Real Gold, in the hope of supporting the people and ideas that they were passionate about.

The subsequent years saw a series of club nights (The International Amalgamation of Champions, Rich History & Cough / Cool) and early shows featuring the best new music including Actress, Adele, Bok Bok, Bullion, Dels, Emmy The Great, Florence and the Machine, Fucked Up, Gwilym Gold, The Horrors, How To Dress Well, Jamie XX, Joy Orbison, Laura Marling, Lightspeed Champion, New Look, Sampha and the Shining. Combined with often being the first of our contemporaries to host nights at some of London’s more original and infamous venues, Time Out called us “saviours of London nightlife.”

The shows paved a way for a series of t-shirt releases including a Young Turks collaboration and Warzone homage, the Train Chronicles debut record and music videos for A.R.E Weapons and Enchante. In Christmas 2007 we opened up a temporary store off Carnaby Street with stylists Avigail Claire and Damian Collins’ label Silver Spoon Attire. We made a move into print and publishing in 2008 with the launch of cult satirical  magazine FUN, internationally distributed for free, and Real Gold members Ben Freeman and Ben Rayner launching Ditto Press and Rayner Books respectively.

In 2010, having already put on nights at its previous incarnation as Dalston’s Pier One Nightspot, Real Gold opened its first bar, The Alibi.

Real Gold family have exhibited at the Barbican, ICA, the RCA, and in Hoorn, New York, Paris, L.A and Tokyo, as well as hosting openings for the Hannah Barry Gallery’s ‘Optimism: The Art of Our Time’ (2008) and the Bold Tendencies sculpture exhibition (2011).

It’s been five years since we started.
We’re having a party to mark this start.
Please come and join us to celebrate.